The suspense in the air was so thick, you could cut it with a knife. Former teammates were now pitted against each other to bring their ideas to life. Monitors were moved, conference rooms requisitioned, and coffee consumed. At the end of May, Disqus broke apart into small teams for a two-day hackathon. The stakes? Fame, glory, and placement on the product roadmap.

We came into this hackathon with a simple idea: Figure out how to make something better to prove we should commit the resources to building it. Anyone - including people from Product, Engineering, Data, Advertising, and even People Ops - got to pitch their idea(s), form teams, and build.

The more ambitious leaders of us could be seen pitching prospective teammates before the pitches were even heard, hoping to secure precious resources for the coming days. Ultimately there could only be a handful of projects, and when the teams were formed, got to work.

It's Friday now - the final day of the hackathon - and teams were working frantically to polish their projects and presentations in time to demo. It almost felt like the end of an exam and at any moment we might hear, "Pencils down, everybody!"

With the hackathon at a close, it was now time to present, vote, and award prizes. First we had 5 superlative, loosely modeled after each of our Disqus values, and our winner-takes-all "Best in Show" grand prize.

The "You Made Your Mark" Award

An interactive prototype exploring how moderators can manage their communities from their phones.
Jono Lee

Envisioning the next generation of analytics for engagement and revenue on sites. Includes a service to push data to other services like Keen.io so publishers can evaluate community metrics next to their own data.
Adam Hitchcock, Mindy Rose, Rachel Cook, Sam Parker, Talton Figgins

The "Take a Stand" Award

A bot that facilitates the sharing of talent within the Union Square Ventures community (and beyond!), and aggregates those hires in a daily/weekly digest.
Kim Rohrer, Jeremy Laskar, Helen Laroche 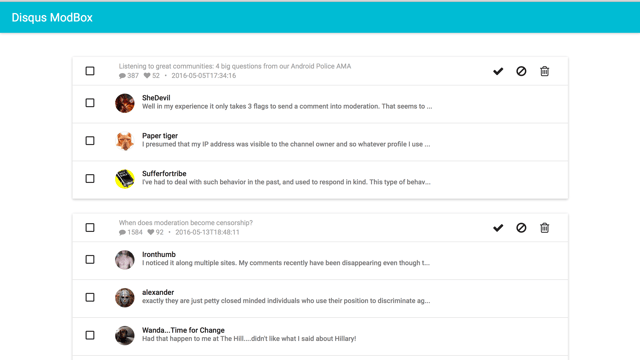 In the winning team's own words:

The goal was to surface the most urgent comments needing moderation straight to the top of the queue rather than relying on chronological sorts. Our all-star hack team made up of engineers and customer success folks took a stab at this and we were all very excited about how it turned out. We combined a whole new pretty UI, a clever algorithmic way of sorting comments, and a fancy frontend built in React (buzzword alert!) to build "ModBox"

Events like these remind us why we’re here and give us new ways to connect to the missions and values we care about. Disqussers truly believe in stretching ourselves and re-imagining what’s possible (on all of our teams!), and hackathons provide a little breathing room to get creative about opportunities for the open web.

Want to participate in our next hackathon? Check out our current job openings!