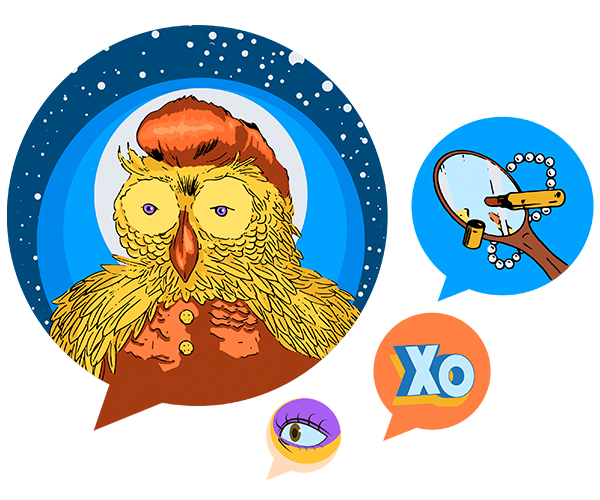 Our second Commenter Spotlight features NightOwl, a frequent commenter over at xoJane. We’re especially pleased to be presenting NightOwl this week, as her favorite community, xoJane, has just received the distinguished FOLIO Award for Best Online Community. XoJane is one of my favorite places to find authentic, generous and funny women sharing their thoughts, and NightOwl is one shining example of why the xoJane community is deserving of this award.

Part of what makes NightOwl’s story compelling is that after engaging in some bad online behaviors early in her Internet career, she is now a reformed commenter with good habits. Meaning, she’s been to the dark side, but has seen the light — so, mind your online manners! Read on to see why NightOwl is such a rich addition to our Commenter Spotlight series.

Q: What are your favorite sites to visit and why?
A: I read xoJane, mostly for the occasionally really gut wrenching personal memoir content, and for the commenters who tend to be hilarious and insightful. I read xoVain because some of their writers, like Alle, do an amazing job of helping me up my beauty game. Another site I spend a lot of time on is scholar.google.com because I’m a full time nerd, and I read a few dozen vintage style blogs using Feedly. I am a voracious reader and read dozens of articles and sites a day. I’ve been involved in forums and online communities since I discovered Usenet and Livejournal in the late 90s. One friend I met on Usenet, when I was 16, was just at my wedding last month. I don’t believe that the Internet “isn’t real life” - I think that’s a smokescreen for bad behavior. I’ve made a lot of “real life” friendships that started online and I met my husband online almost 10 years ago before that was a normal thing to do. I also hurt people because of things I said or did online, when I was younger and not thinking about how that was a real person behind the user icon. The best and worst moment of that was being nicknamed “the S.A.V.A.K.” (after Iran’s secret police, known as a hated and feared institution) by someone in an online community I was part of.

As a grad student studying human behavior, I am also fascinated by the social dynamics of online groups and how they are all so similar - the hierarchies, the persistent sources of conflict, the group-specific slang. I’ve seen the same patterns over and over in my 15 or so years on the Internet. It’s taught me a lot about human interaction. I am perhaps perversely interested in trolls, especially the really effective ones, because effective trolling is really a complex form of social manipulation. You have to really know what buttons to push and while I don’t relate to that motivation, in an odd way it takes social savvy to stir the pot.

Q: What types of stories lead to good discussions?
A: Stories that are provocative without being sensationalized. It’s easy to create click bait, it’s harder to provoke genuine thought and dialogue with a well written, balanced piece. For me I know a piece is good if I come home and tell my husband about it. The recent post by Charlotte Laws, the “Erin Brockovich of Revenge Porn,” is a good example - it tackled a complex and important topic from the perspective of an expert with personal investment in the issue. And that’s just a great title in terms of getting traffic and attention, but also having real content supporting it.

Q: How do you know you’ve captured your thought well?
A: If it generates discussion, whether it’s just “wow you said exactly what I was just thinking” or “I completely disagree and here’s why.” When people tell me that they look for my user photo when scrolling through comments because they value what I have to say, it makes me feel like I am part of an actual community, rather than just an anonymous name and a picture. As a researcher, I also feel a particular responsibility to comment on articles that involve science or research, because I have a bit of a unique inside perspective on those issues. One thing I like about xoJane is that the readers are pretty high in science literacy and will call authors out if they are clearly biased.

I also follow the rule of not saying anything in print that I wouldn’t want on a billboard or the front page of the New York Times.

Q: Why did you choose the screen name or avatar you did?
A: My avatar is Lucille Ball, in real life I consider my dress style “I love Lucy on acid” so it’s fitting. I am part of a local community that keeps the culture of the 20s-50s alive through events like swing dances, the jazz age lawn party, and other events for historical enthusiasts. Lucille Ball is like my Beyonce.

NightOwl is one of the first screen names I ever had online 15 or so years ago and I periodically reuse it. It makes me think of when I first discovered the Internet and would get on Usenet via dial up after my parents were asleep, with only the glow of the monitor in the room. I can still remember all those dialup sound sequences. Plus, owls are cute.

Q: What kind of feedback or reaction are you looking for when you comment?
A: Upvotes are nice but dialogue is better. Unlike perhaps most of the Internet, I appreciate being told when I’m wrong as I consider that an opportunity for growth. The best discussions are ones where I learn something new and reconsider my view of the world because of it. I no longer engage in arguments that get heated or personal (I have quit the S.A.V.A.K., as it were).