Poll: Why Do You Downvote Comments? 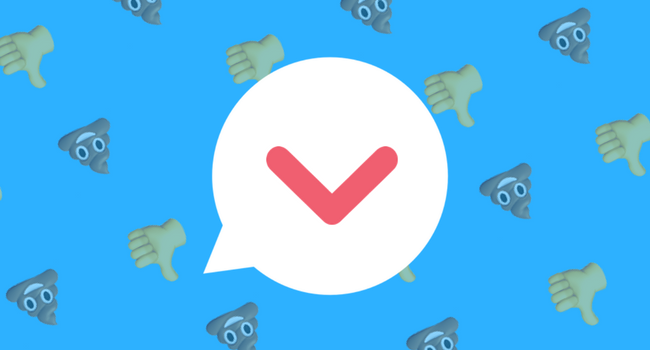 Before we start, there is something we should state upfront: the ability to downvote comments in Disqus never went away. You can still downvote comments which will affect the order they appear in a discussion when using the Best sort. We simply hide how many downvotes a comment has received and only show the total upvotes.

Now that we’ve gotten that out of the way 😅, let’s begin by saying this: we know you have strong opinions about downvotes and we want to hear them. Yes, really.

Specifically, we want to learn why you downvote comments. This is an important not just because we get a lot of feedback about it but also since voting is the most popular way to engage on Disqus. To that end, we want to start a conversation around this topic to understand where you stand and hopefully improve the way voting works in the future.

Here are the most common reasons we’ve observed about why people downvote comments:

This list is probably not comprehensive nor completely representative of the different readers that participate in discussions every day on Disqus. That’s where you come in.

We created a simple poll question that you’re invited to answer now (if you're not seeing the poll, you can answer it directly via this link):

You may have multiple reasons why you would downvote a comment. Instead, select the primary reason why you downvote a comment the majority of the time. Not finding a reason that fits you? Just answer “Other” and post a comment below explaining your reason in more detail.

After answering the poll, head over to the discussion and post a comment if you have additional thoughts you’d like to add or read what others have to say. We look forward to hearing from you! As a reminder, we read every comment here and appreciate you sharing any feedback.