How SpoilerTV built a community of 120K active readers with Disqus

It’s May and many television shows are wrapping up their seasons. For Andy Page, it’s also the busiest time of year for SpoilerTV, a site for TV news, rumors, and reviews, which he started in 2007. Luckily, he’s been building websites for over a decade.

Before starting SpoilerTV, Andy was the brains behind a popular fansite for ABC’s hit drama Lost. The site was a success, drawing thousands of hits every day during the peak of the show’s run. As the show approached its end though, Andy set his sights on a new project: SpoilerTV.com

SpoilerTV would be even bigger than Andy’s first site, attracting millions of engaged readers per year—or at least, that’s what he hoped. In this competitive world of digital media however, building a following online is no easy task. Andy had already created one successful website, but could he replicate his success?

Fortunately for Andy, he already knew how to produce high-quality content. But he also knew from experience that great content alone wouldn’t set him apart from the competition. He needed to build an audience, get readers engaged, and give them a reason to keep coming back for more. For that, he turned to Disqus.

Community as a key differentiator

In a highly competitive environment for publishers on the web, readers have an infinite number of options for consuming content. In order to stand out from its peers, SpoilerTV focused on building its community.

Here’s Andy talking about the importance of investing in one's community:

“I think a site’s community is the most valuable asset they have. You live or die by your community. If you don’t nurture it and look after it, your site withers. It’s so hard to retain readers these days since there are so many sites out there on the web.”

Andy was on to something, but as we know you can’t just add comments and expect a community to emerge. You have to listen, engage, and build relationships with your readers.

These aren’t simple tasks of course. Having invested in their community though, SpoilerTV has seen this commitment to their readers pay off in meaningful ways.

“I’ve learned that 90% of commenters are very knowledgeable, polite, and simply love to have discussions online. If you build an environment where people can do this without fear or ridicule, you'll attract the best commenters and cultivate an engaged community.”

Lowering the barrier to commenting

SpoilerTV has been using Disqus almost from day one. That decision hinged on one important criterion: will readers adopt it?

“We were on Blogger and their default commenting system. It was very, very poor. You had to use either OpenID or a Google account to comment.

When we switched to Disqus, the number of comments probably quadrupled. Many of our readers were now joining in the conversation because it was so easy to get started. A lot of people who were previously reluctant to create an account to participate suddenly showed up.”

Readers especially loved real-time comments when discussing their favorite shows. When new comments or replies are posted, Disqus automatically loads the comment in the thread without a page reload, removing a common barrier to online discussion. It captured the serendipity of the watercooler experience, turning SpoilerTV’s discussions into an online destination.

What about readers visiting the site on mobile? For SpoilerTV, this became an increasingly important question. When the site first launched, mobile users only represented a minority of SpoilerTV’s audience. But over time, mobile readership grew to represent almost half of all the site’s traffic:

“We’re at around 55/45 in favor of desktop; before it was more like 95/5. Disqus was mobile-friendly and continued to improve over the years. It’s just as easy to comment on mobile as it is on desktop.”

As mobile readership grew, Andy was happy to discover that Disqus' mobile-friendly design could keep up with SpoilerTV's evolving audience, without additional configuration changes. And with the Disqus for iPhone app, readers can now comment on their favorite discussions while on the go. 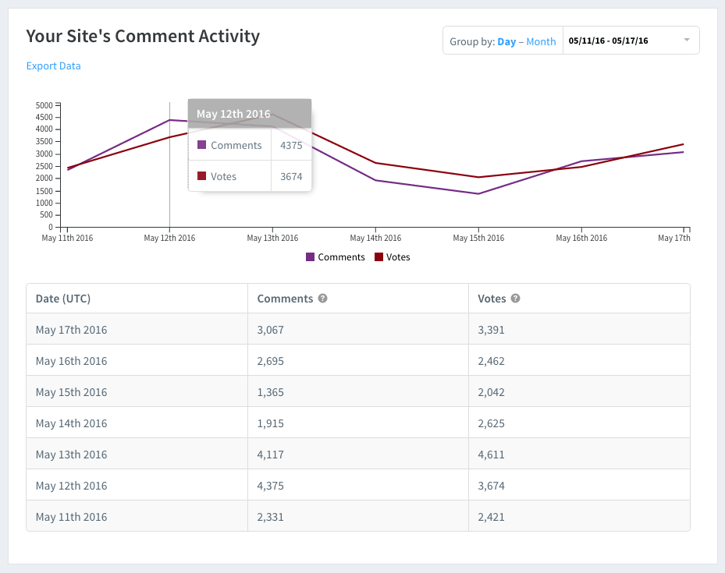 These strategies to make it easier for readers to comment have paid off massively for SpoilerTV. To date, commenters have contributed over 1.6M comments with close to 2K new comments posted daily.

Getting the entire team involved in the discussion

It’s not unusual to see writers on SpoilerTV replying directly to commenters on their own articles. In fact, Andy encourages his team to subscribe to their articles to get notified whenever a reader leaves a comment.

SpoilerTV doesn’t have a dedicated moderator to monitor comments. Instead, that task is shared across a small group of writers who they’ve added using Disqus’ team moderation feature.

“We have about 3-4 team members who help moderate. While some of us use our personal accounts, we also have a shared account for enforcing our comment policy, letting users know why a comment was removed, or answering questions.

Since we have writers around the globe on different time zones who help moderate, that gives us decent coverage throughout the day in case I’m asleep or away.”

They’ve found that getting the team involved in the discussion has helped break down the barrier that separates the writers and readers on some sites. As a result, discussions are often civil, active, and fun.

Even as SpoilerTV has grown in traffic to the same heights as the largest entertainment sites on the web, the site “for the fans, by the fans” continues to recognize its community in shaping it to what it is today and into the future.

Can Disqus help you grow your website’s audience, too?

Today, SpoilerTV is on pace to break 100 million page views this year alone. This milestone is a testament to the community that Andy and his team of over 80 writers have established. The site now covers 350+ shows every year, a far from a dedicated site for just one show.

Thank you so much to Andy for helping us get to know more about how Disqus helps him succeed.

Can Disqus help you grow your website’s audience, too? If so, get started today.