2 new tools to fight trolls, improve discussion quality, and save your team time!

We're excited to announce two new moderation features for publishers using Disqus Pro - Shadow Banning and Timeouts. With these new features at their disposal, moderators now have even more flexibility when dealing with troublesome users. While the traditional user banning feature is a great way for moderators to keep spammers and trolls out of their communities, a one size fits all solution is not always flexible enough to deal with different types of users. That's where Shadow Banning and Timeouts come into play.

Shadow Banning: A discreet method of banning the most troublesome users such as trolls and spammers and stop them from coming back with new accounts.

A traditional ban is enough to stop most troublesome users. However, some communities struggle to deal with a small group of troublesome users who keep coming back with new accounts. When dealing with these users, a traditional ban is not sufficient to deter this behavior. Shadow Banning addresses the issue of persistent spamming and trolling by allowing moderators to discreetly banning users without their knowledge. Shadow Banned users will be able to continue posting normally. However, their posts will not be visible to other readers.

"It has really helped to throw a wrench in their efforts. I think it's discouraging them from further trolling. They hate typing for an hour for nothing." - Mark, Lead Moderator at RawStory

To Shadow Ban a user: 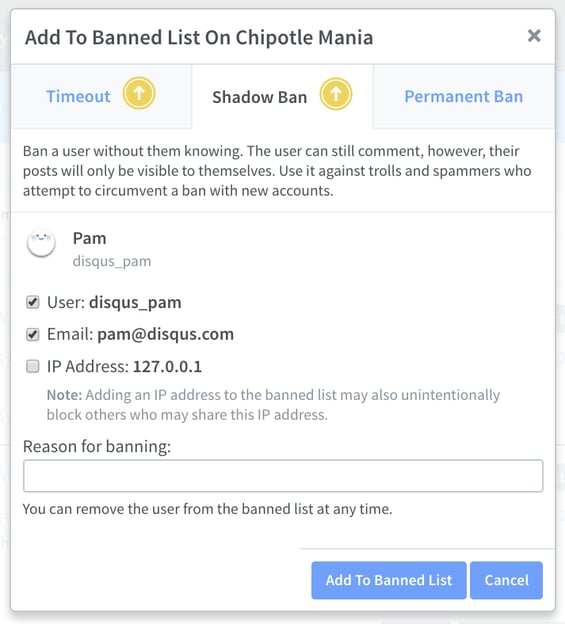 Timeouts: Give users who violate community rules a chance to cool off and improve their behavior.

In some cases, a traditional ban is too severe of a punishment. Dealing with an occasionally troublesome users can be a difficult task for a moderator, especially without the option for a less severe punishment nor the ability to provide feedback on how the user can improve their behavior. A Timeout, or temporary ban, allows a moderator to ban a user for a specified amount of time and gives the banned user an opportunity to improve their behavior and return to the community.

"This is another great feature. Previously the moderation team have been keeping manual notes in our slack channel to remind us when to unban someone. So having this automated will again save time and effort." - Andy, Founder of Spoiler TV

To enforce a Timeout, moderators should follow the same process outlined above for Shadow Banning, select Timeout instead of Shadow Ban in the final step, and then choose the duration of the timeout. 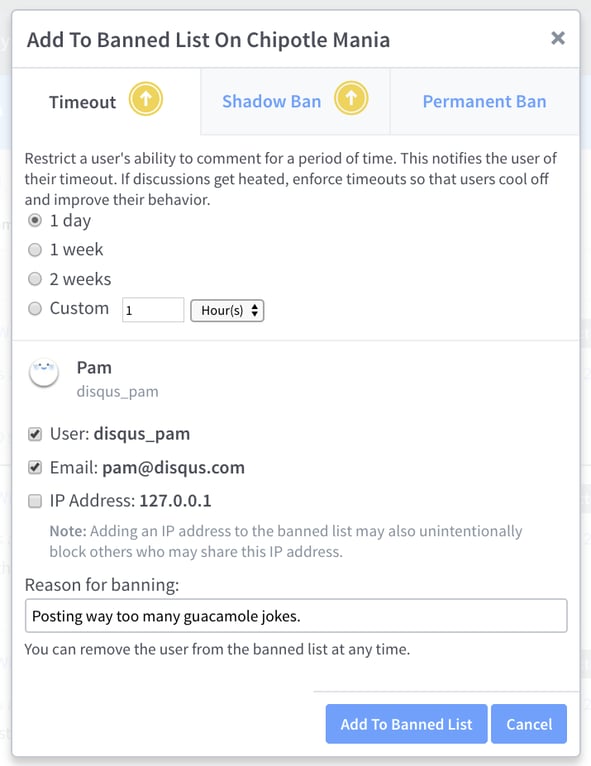