Movie Word of Mouth: A Study of Internet Comments

Every day, people who use Disqus generate more than 7,000 hours of conversation across any number of topics imaginable. Movies are among the most popular drivers of discussion. Of course, this shouldn’t come as a surprise because who doesn’t love debating the merits of a particular film or actor’s performance, or searching for deeper meaning from movies they’ve seen (Ron Burgundy is a metaphor for post-Cold War America success in spite of itself…think about it).

With so much commenting activity to work with, we set out to better understand what drives people to talk about movies. Are there interesting patterns in how people respond, in terms of online discussion, to movie-related content? Do specific marketing actions tend to draw out more conversation and chatter?

To answer these questions, we looked at two summer blockbusters from this year, X-Men: Days of Future Past and The Amazing Spider-man 2. We chose them because as tentpole movies within successful franchises, they both drove a great deal of discussion across Disqus. Also, X-Men DFP and Spider-man 2 were of the same genre (superhero / fantasy) and were released in the same month (May 2014).

In collaboration with our partner Temnos, we performed a semantic analysis of discussion threads pertaining to the two films.

So what did we find?

The teaser trailer matters. A lot.

The first trailer, or “teaser”, overwhelmingly elicited the most comments among the key marketing events that we tracked, including the release of photos, cast interviews and subsequent trailers. Indeed, among the ten most commented articles related to the X-Men trailers, the top six were about the teaser. 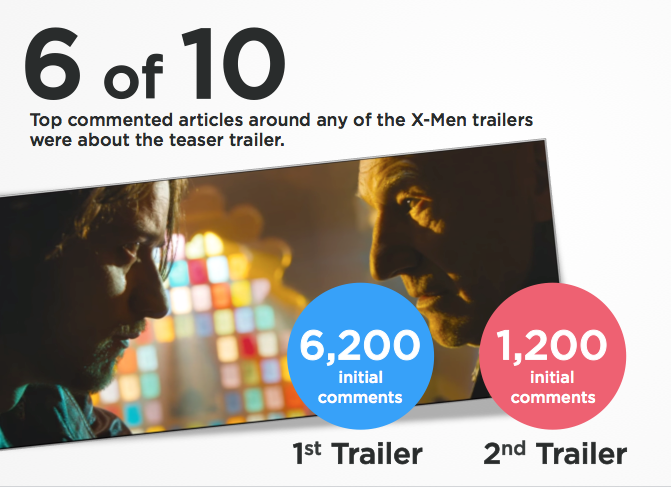 To further illustrate, the X-Men DFP teaser, released in October 2013, saw 6,200 comments in its first week on Disqus. The second trailer, by contrast, released in March 2014, generated only 1,200 comments in its first week. This finding is notable in that the second trailer was 10% longer (2:17 vs 2:37) and revealed more of the movie’s visuals and plot.

We found that content related to film rumors and speculation drove discussions with the greatest longevity and highest comment volume among the content types we analyzed.

Rumor and speculation-based articles feature headlines like this:
“Could the Spider-Slayers Show Up in the Amazing Spider-Man 2?” (Slashfilm.com)
“X-Men: Days of Future Past Explores Magneto’s Involvement in the JFK Assassination” (Superherohype.com)

For X-Men DFP, these types of articles drove, in aggregate, twice as many comments as all X-Men trailer-related content combined (19,000 vs. 9,000 comments). While movie trailers see the largest spike of comments initially, they also have a short shelf life as compared to rumor-based content (9 days vs 19 days for the discussion to reach its conclusion).

Photos more than hold their own versus videos

This finding really surprised us.

Our hypothesis coming in was that because videos are presumably more engaging than still photos, they would drive more conversations. 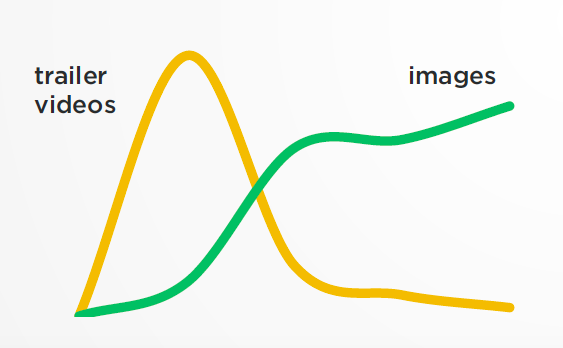 In our analysis, we compared comments on a variety of movie-related still images (i.e. cast and set photos, movie posters) versus comments generated from videos (i.e. trailers). We found that in aggregate, photo-based discussions drove more comments than trailer-based discussions. In the case of X-Men DFP, we not only saw 3% more comments around film-related photos than film-related trailers, but remarkably, longer lasting discussions – 13 days vs 9 days.

Star power is not what it seems

We found that key but supporting characters to the storyline of the films – and the actors who portray them – can generate as many conversations as top billed stars.

Dane DeHaan was not a top billed actor for The Amazing Spider-Man 2 but he drove an inordinate number of comments in relation to his billing. We compared the number of comments in the context of Spider-Man that he and his character, Harry Osborne, produced versus Emma Stone / Gwen Stacy. The data revealed a distinct contrast. Mr. DeHaan received more total comments than Ms. Stone (19,000 vs. 17,000) and a higher average number of comments per media mention (27 vs. 23). This in spite of Mr. DeHaan being mentioned in 12% fewer articles than Ms. Stone across Disqus. Of note, we saw a very similar result around X-Men related discussions in comparing comments generated by Peter Dinklage (9th billed actor) and Halle Berry (top billed).

We also discovered that the top-billed actors of X-Men DFP and The Amazing Spider-man 2 did not generate comments quite in proportion to their star power.

Let’s take Jennifer Lawrence. As an Oscar-winning actress with an extensive career of high profile roles, she generates a great deal of media attention. As expected, Ms. Lawrence drew the most comments across Disqus by far as compared to two of her top-billed X-Men DFP co-stars.

However, most of these comments were unrelated to her role as Mystique/Raven in X-Men. When looking at comments specifically related to X-Men DFP, we see a different ranking. 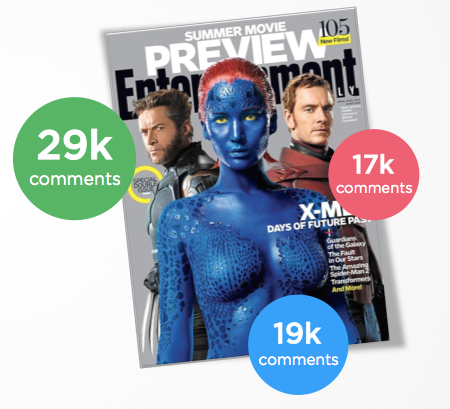 In an X-Men context, Michael Fassbender drives nearly the same number of comments as Jennifer Lawrence, while Hugh Jackman tops the list. It’s an interesting result because there were 30% more articles related to Ms. Lawrence’s participation in the movie than on Mr. Fassbender’s. Yet Michael Fassbender (and his character, Magneto) very nearly reached the level of comments around Jennifer Lawrence / Mystique.

These findings strongly suggest that supporting actors whose characters play a central role in the movie’s plot and/or who are new to the storyline or franchise can generate levels of discussion that surpass their more prominent co-stars. Context matters.

Through our analysis working in partnership with Temnos, we discovered the following:

What do you think of our findings? Have you been part of the movie-goer word-of-mouth machine online? Did you comment about a teaser trailer or follow any movie-related rumors? Let us know in the comments.